Pain from a rib or sternal injury or associated with inflammation or an abnormality of the chest wall can be difficult to manage, simply because it's impossible to 'rest' the area of concern. As well as the associated physical effects of acute or chronic chest wall pain is the effect it can have on the mechanics of breathing leading to breathlessness, which tends to exasperate the pain as well as the physical effects on the lungs. If acute, chest wall pain can lead to 'poor breathing' and risks of sputum retention (inability to clear spit), atelectasis (whereby at the 'microscopic' level the lung bases start to collapse) and pneumonia (chest infection). See Other Chest wall problems.

Immediately following a rib or sternal injury pain can be severe, particularly when ribs are fractured. Various approaches have been applied to these sorts of injuries and often a 'scoring system' around severity of the chest wall injury (age, number of ribs broken, underlying lung disease etc) along with what is called an 'analgesic ladder' of escalating pain treatment. At St. George's, a leading centre for trauma in London we apply this principle. 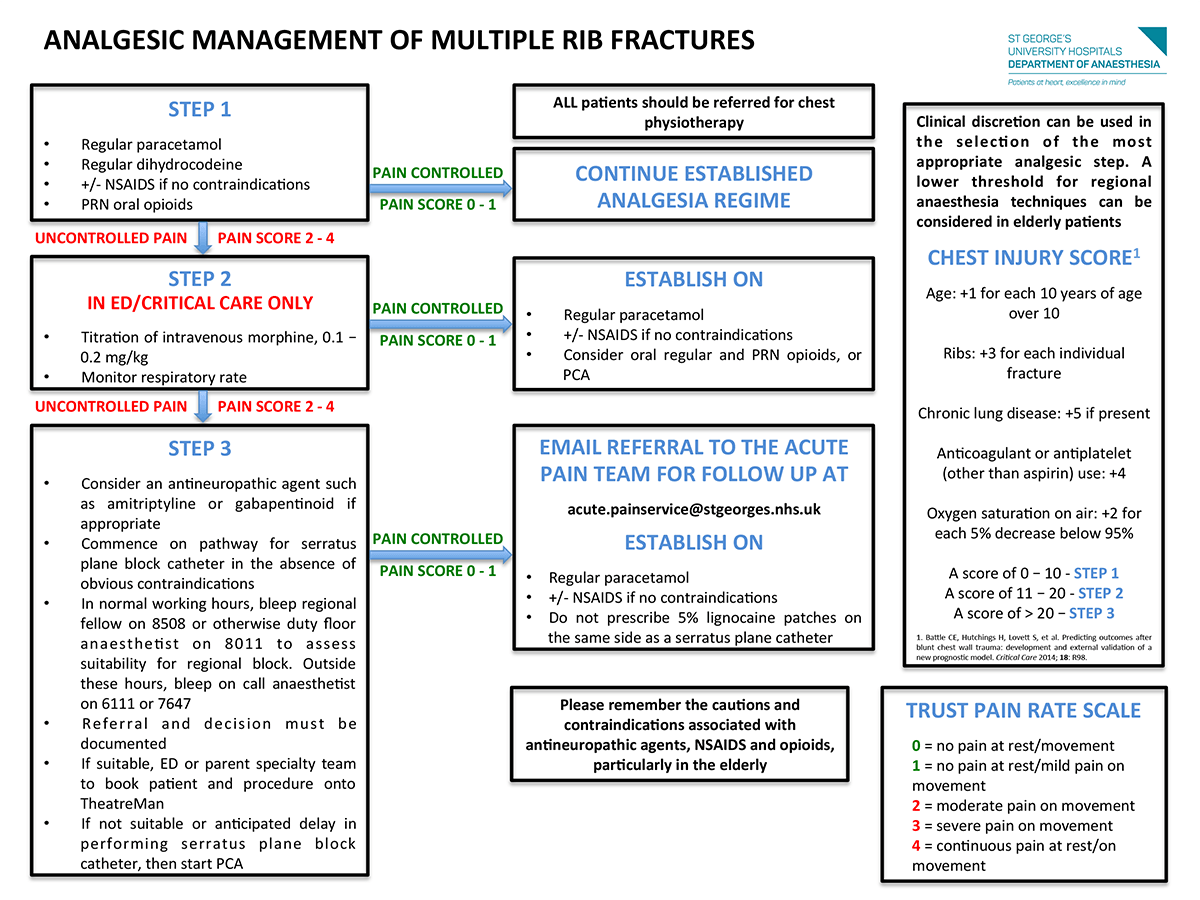 Step 1: Simple Analgesics. Typically involves a combination of over the counter (OTC) analgesia such as Non-steroidal anti-inflammatory painkiller such as Ibuprofen (if not contraindicated), paracetamol, or a weak opioid painkiller such as Codydramol or Co-codamol. This is taken typically for a short period of a few days to several weeks until the pain settles.

Step 2: In the hospital setting, if step fails and pain not controlled, IV morphine with additional of a strong oral opioid such as slow release Morphine Sulphate (MST) can be used. This often combined with a antiemetic and laxative to counteract the side effects of nausea and constipation.

Step 3: Patient Controlled Analgesia refers to IV morphine boluses controlled by the patient. In addition, gabapentin can also be added.

Step 4: Regional aesthetic techniques and surgical rib fixation. Increasingly recognised as important steps in managing poorly controlled pain particularly if associated with breathing issues. Historically thoracic Epidurals (spinal catheter) were used but increasingly alternatives such as paravertebral blocks (local anaesthetic into thoracic space next to the spine (paravertebral). This technique is often utilised if patients are having thoracic surgery to fix ribs, together with intercostal blocks. This technique can be very effective when local anaesthetic is injected into the extra-pleural plane but requires accuracy. It can be combined with a extra-pleural catheter for continues analgesia. More recently, use of a Serratus anterior plane block that can be placed under ultrasound guidance have be used successfully to block the side of the chest affected. For Operative Fixation See Surgical treatment.

In addition to the "analgesic ladder" of pain control described novel such as cyroanalgesia (application of cold to chest nerves) or the use of TENS machine may be considered.

Well described following chest wall injury though the number of patients affected remains unclear. Chronic pain can lead to significant restriction of activities and a reduction of a quality of life. Seeing an expert in pain control is advised.