The chest wall can be divided into three layers:

Chest wall lumps can come from any of these layers and their components including the blood vessels and nerves that course through them.

Depends on what the chest wall lump is caused by, but along with the lump or deformity there may be associated pain, swelling, inflammation (redness), discharge, clicking or altered sensation. If large they can cause a restriction of certain movements. The lump may develop quickly such as an abscess, or slowly or become noticeable with significant weight loss or with certain activities for example a lung hernia.

Chest wall asymmetry (variation between one side and another) is common and often presents in childhood as a lump in the anterior chest wall. It may be related to scoliosis (curvature of the spine) presenting with a lump on the chest on the opposite side to the curvature along with uneven shoulders and/or hips. Pectus deformities - pectus excavatum and particularly pectus carinatum can present with a ‘lump’ in the anterior chest wall. 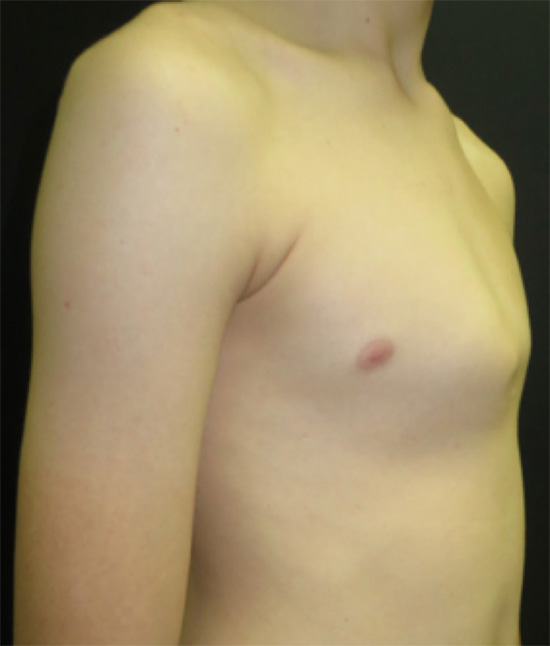 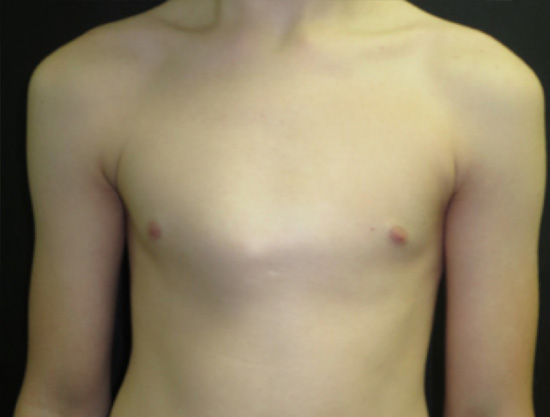 Pectus carinatum in a 14 year old boy. It developed during a rapid growth spurt over a year

Pectus deformities can be present at birth or within the first year, but often only become noticeable during puberty. Associated musculoskeletal abnormalities such as Marfan syndrome, Ehlers-Danlos and Poland Syndrome are common but other associated conditions include Congenital heart disease, osteogenesis imperfecta, muscular dystrophy, Pierre Robin Syndrome, Turner Syndrome, and prune belly Syndrome.

Rib Abnormalities and anatomical variations of ribs can cause an ‘apparent’ chest wall lump. One of the more common variants is Prominent Convexity of the anterior rib/s presenting at a young age. It’s important to differentiate this from a pectus carinatum deformity.

Other types of rib abnormalities presenting with an apparent chest wall lump include rib Segmentation and Fusion Anomalies leading to abnormally shaped ribs for example bifid rib, fusion or bridging between ribs or smaller (hypoplastic) or missing ribs (absent) as in Poland’s Syndrome. 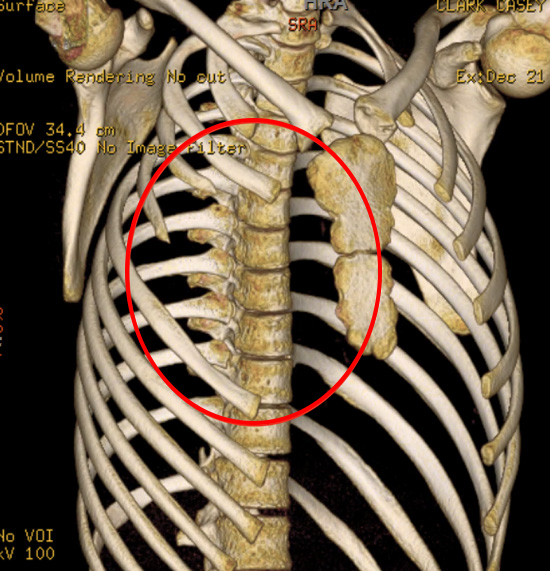 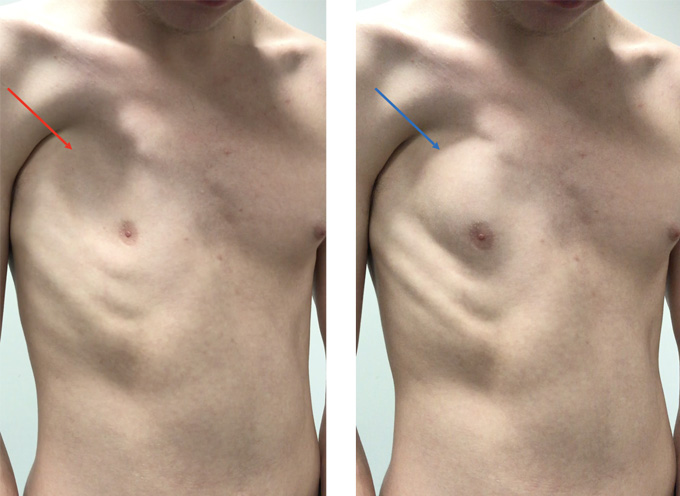 Supernumerary or extra ribs can also be seen, the most common is cervical ribs, arising from the 7th cervical vertebrae, on one or both sides. It does not present with a chest wall lump but can cause temporary loss of feeling, weakness or tingling in the affected arm and fingers.

Various benign (non-cancerous) conditions or growths can cause a chest wall lump to develop. They can be divided into benign soft tissue tumours and bony benign tumours of the chest wall.

Benign tumours of the chest wall

Lipoma is a benign tumour made of fat tissue. They can be occasionally multiple and are generally soft painless and movable to the touch. They usually occur just under the skin, but occasionally may be deeper. Most are less than 5 cm in size. They can occur on the chest and upper back. 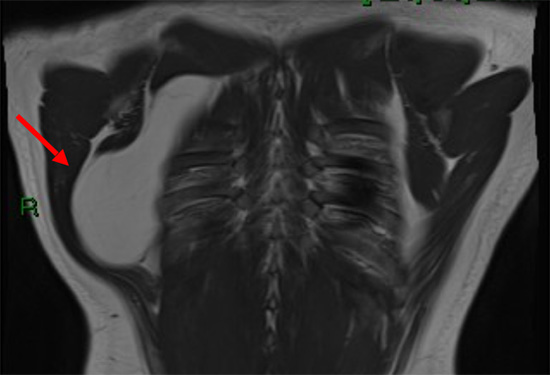 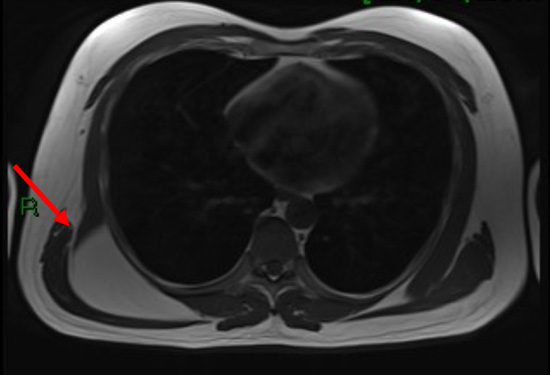 Fibromas are another type of benign tumours that are composed of fibrous or connective tissue. They can grow in all organs, arising from mesenchyme tissue including the chest wall. They can be described as hard fibromas; in the skin this is called dermatofibroma (a fibrous nodule of the skin). Keloid scars are a type of hard fibroma. Or soft fibromas or skin tags. There are other types of fibroma depending on their origin, composition and location. Elastofibroma dorsi is a benign soft-tissue tumour with a characteristic location and imaging appearance.

Peripheral Nerve Tumours are growths originating from nerves or the nerve coverings. They can occur anywhere in the body including the chest wall. Schwannomas, also known as neurilemomas or neurinomas, are benign tumours that originate in nerve sheaths and are usually slow growing. Chest wall schwannomas arise from spinal nerve roots and intercostal nerves and typically occur in patients between 20 and 50 years of age. Neurofibromas are slow-growing neoplasms that originate from a nerve, may or may not be encapsulated, and may include components of cystic degeneration and calcification. Neurofibromas develop most commonly in patients between the ages of 20 and 30 years. Along with Ganglioneuroma and Paraganglioma, peripheral nerve tumours tend to be picked up incidental on x-ray or occasionally are associated with altered sensation or pain but rarely cause a chest wall lump as they tend to grow in the chest cavity. 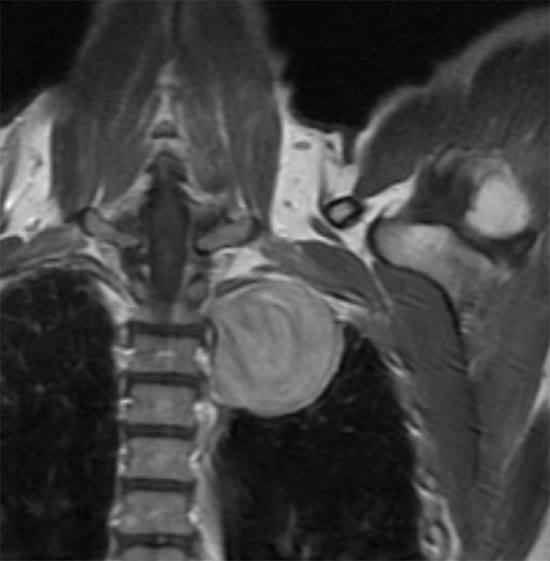 MRI Image of a large Schwannoma in the left upper chest cavity a middle-aged man with left arm and shoulder pain but no no chest wall lump. It was removed surgically

MRI image of a right swollen pectoralis muscle with an underlying lymphangioma (red arrow). It was surgically removed

Solitary fibrous tumours are rare growths of soft tissue cells that can form nearly anywhere in the body. They most commonly occur in the lining of chest wall (the inner or pleural lining). Most are benign though they can become malignant. They very rarely cause a chest wall lump.

Fibrous dysplasia is an uncommon bone disorder in which scar-like (fibrous) tissue develops in place of normal bone. This irregular tissue can weaken the affected bone and cause it to deform or fracture. It can affect the ribs and rarely the sternum. It tends to affect a single rib (monostotic) and more severely multiple bones (Polyostotic). The majority of monostotic lesions have no symptoms and its discovered incidentally on x-ray. Symptomatic patients can have pain, possibly secondary to a pathologic fracture, or with an obvious deformity.

An aneurysmal bone cyst is a benign, but expansile tumour like lesion that generally occurs in the long bones including the vertebral column and rarely in the chest wall. A giant cell tumour is a rare, aggressive non-cancerous tumour. It usually develops near a joint at the end of the bone. Most occur in the long bones of the legs and arms. Giant cell tumours most often occur in young adults when skeletal bone growth is complete. It is very rare in the ribs and chest wall. Other types of benign bony tumours that can occasionally affect the chest wall causing a chest wall lump or chest wall symptoms include Chondromyxoid fibromas are a type benign cartilaginous tumours which occasionally occur in the ribs, spine, or scapulae and rarely the sternum; Ossifying Fibromyxoid tumour which rarely affects the chest wall but can lead to a slowly growing painless mass and Enchondromas, a more common benign cartilage tumour found inside bones including rib bones.

An exostosis, also called a bony spur, occurs when a bony growth extends beyond a bone's usual smooth surface. Exostosis can cause chronic pain or irritation, depending on its size and location. See chest wall pain. Sometimes, cartilage will grow over an area of exostosis, which is called osteochondroma. These are a common benign bony tumour but a rare tumour in the ribs and chest wall.

The most common malignant tumours affecting the chest wall are called metastasis, cancers that arose elsewhere, such as the lung, colon or breast and have spread to either the soft tissues or especially the bony skeletal of the chest wall. Bony metastasis can lead to pain and deformity as well as risk of rib or even sternal fracture (pathological fracture). 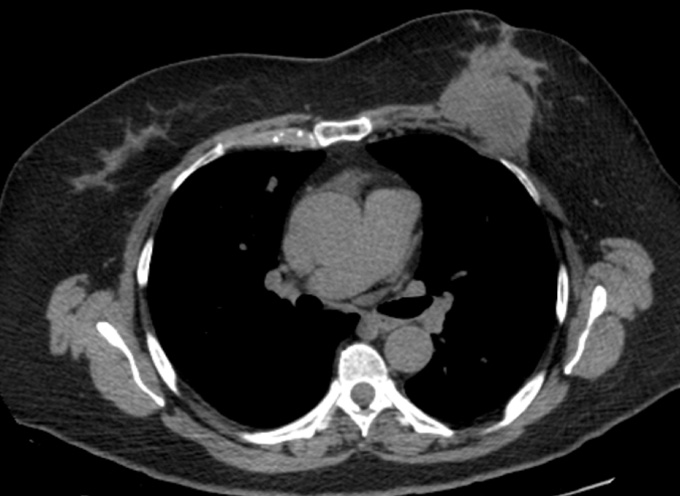 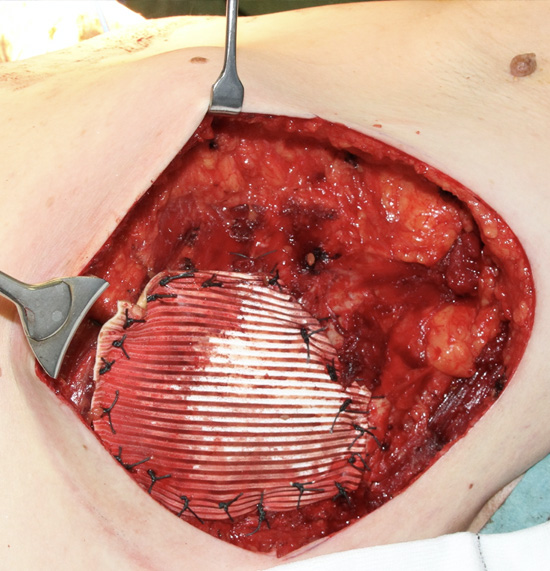 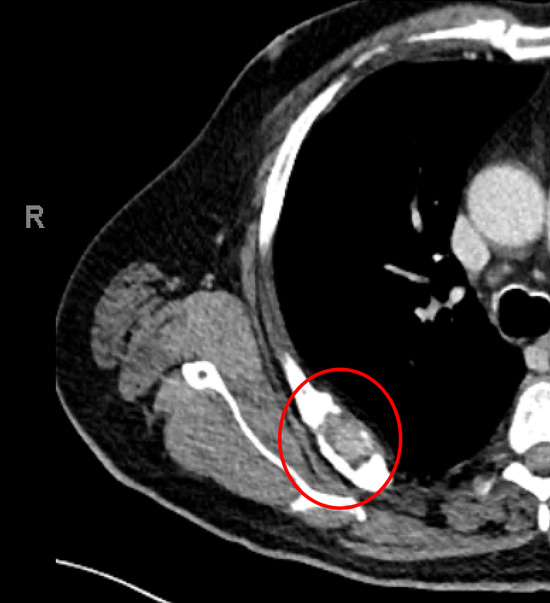 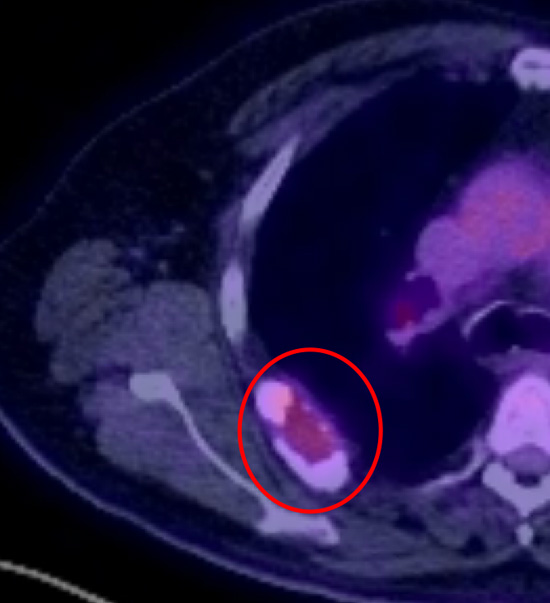 Secondary (metastasis) cancer to the 7th right rib causing pain on moving the shoulder (red rings) on chest CT (left) and PET (right). The original cancer was from the thyroid. The rib and cancer were surgically removed

Malignant tumours of the chest wall

Neuroblastoma is a rare type of cancer that mostly affects babies and young children. It develops from specialised nerve cells (neuroblasts) left behind from a baby's development in the womb. It occurs in the adrenal glands situated above the kidneys, or in the nerve tissue that runs alongside the spinal cord in the neck, chest, tummy or pelvis. Ganglioneuroblastoma is a tumour that also arises from nerve tissues and is regarded as an intermediate tumour, one that is between benign (slow-growing and unlikely to spread) and malignant (fast-growing, aggressive, and likely to spread). Both Malignant Peripheral nerve sheath tumour and Malignant Solitary fibrous tumour arise from the same cells as the benign counterparts but behaviour more aggressively, with local and/or distant spread. Dermatofibrosarcoma is a rare type of cancer, a soft tissue sarcoma that develops in the deep layers of skin. It is sometimes described as having tentacles that can grow into surrounding fat, muscle and even bone. It can present on the torso.

Myeloma is a type of cancer that develops from cells in the bone marrow called plasma cells. Bone marrow is the spongy tissue found inside the inner part of some of our large bones. The bone marrow produces different types of blood cells. It often presents in older patients with bone pain often in the back or ribs though a chest wall lump is unusual. Related to myeloma, Solitary bone plasmacytomas is an uncommon plasma cell tumour which is localized to bone. They may involve any bone, but they have a predisposition for the red marrow-containing axial skeleton including ribs and sternum.

Examples of bony sarcomas, Chondrosarcoma is a cancer composed of cells derived from transformed cells that produce cartilage whereas An Osteosarcoma (OS) or Osteogenic sarcoma (OGS) (or simply bone cancer) is a cancerous tumour in a bone.

The most common symptoms are chest wall swelling with localised pain and tenderness, typically persistent, worse on breathing deeply or with certain activities. The pain and swelling may be associated with a fever, ‘flu-like illness’ and chest symptoms such as a cough. Diagnosis is usually clinical along with blood tests and X-rays.

Types of chest wall infections include: 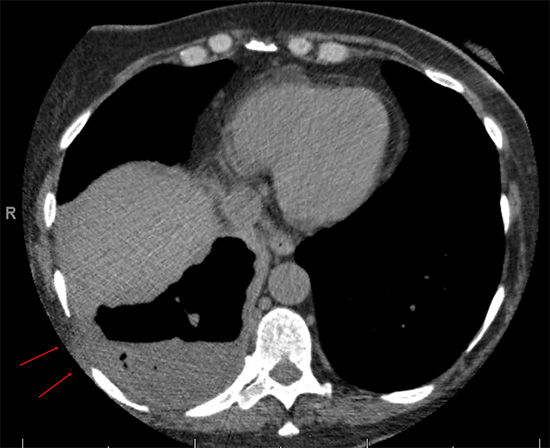 Empyema necessitans: Chest CT scan of an elderly lady with underlying health issues with a right sided empyema that is starting to extend into the chest wall (red arrows)

Chest wall infections may be associated with certain types of infection, such as Tuberculosis or be secondary to recent chest or heart surgery or following chest trauma. 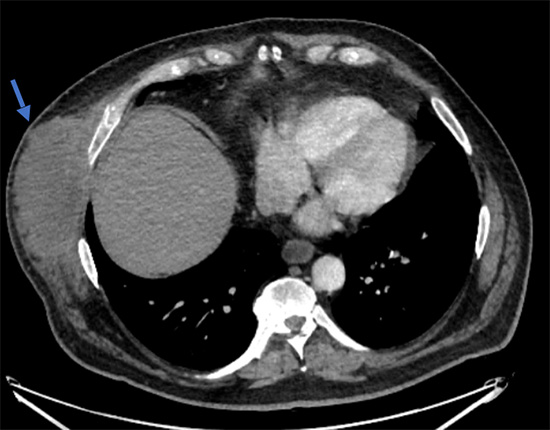 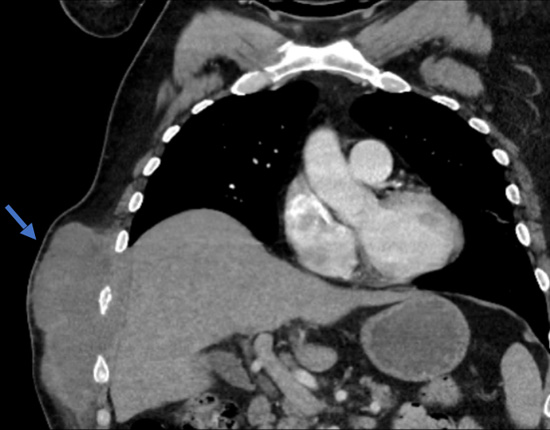 Following chest wall trauma, either immediately, shortly after or many months following the injury a chest wall lump can develop depending on the cause.

Immediately or within a few hours following a chest injury, the chest wall can become bruised and begin to swell. A chest wall Haematoma is caused by a build-up of blood in the soft tissues of the chest wall (superficial) but can be deeper (intermediate) or in the chest cavity itself (deep). This is called a Haemothorax (blood in the chest cavity). The severity and seriousness of a haematoma depends on whether there is still active bleeding, as well as the size and location. 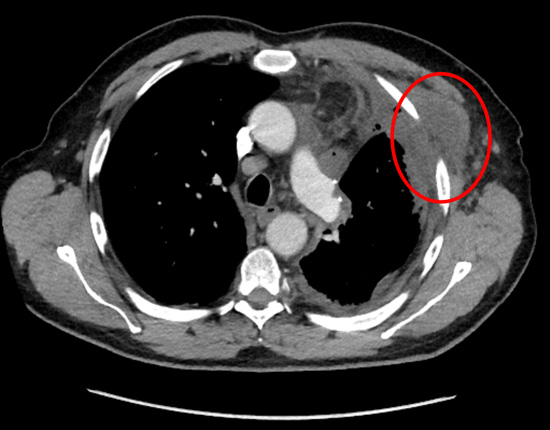 Rib or sternal fractures if badly displaced can lead to a chest wall lump that may become painful and tender and lead to deformity and a restriction of activities. See Rib and Sternal injuries. Following the original fracture, the bone ends typically begin to heal and lay down bone callus (a connecting bridge a bone fracture made of bone and cartilage cells) followed by remodelling of the bone and healing. If the bone end were badly displaced and/or the patient has impaired healing, the bone (typically the rib but occasionally the sternum) may fail to heal properly. See complications of rib injury.

Following a chest wall injury, due to degeneration or a chronic inflammatory condition such as Osteoarthritis, bony projections (exostosis) or bony spurs (Osteophytes) can develop along bone edges particularly joints and the spine. They are unusual in the skeletal chest wall and rarely cause symptoms but can cause persistent pain and tenderness particularly on certain movements such as twisting. See chest wall pain.

Chest wall lumps once diagnosed can be treated either conservatively involving reassurance, rest, restrictions of activities and painkillers, or through some form of intervention including targeted physical therapy, drainage or a variety of surgical options including excision (removal) depending on what the underlying cause is. See Treatments.